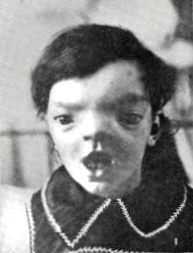 Because hypertelorism is an anatomic condition associated with a heterogeneous group of congenital disorders, it is believed that the pathological etiology of hypertelorism is also heterogeneous. Theories include too early ossification of the lower wings of the sphenoid, an increased space between the orbita, due to increasing width of the ethmoid sinuses, field defects during the development, a nasal capsule that fails to form, leading to a failure in normal medial orbital migration and also a disturbance in the formation of the cranial base, which can be seen in syndromes like Apert and Crouzon.

For the treatment of hypertelorism there are 2 main operative options: The box osteotomy and the facial bipartition ( also referred to as median fasciotomy).

Box osteotomy:- This treatment of orbital hypertelorism was first performed by Paul Tessier.The surgery starts off by various osteotomies that separate the entire bony part of the orbit from the skull and surrounding facial bones. One of the osteotomies consists of removing the bone between the orbits. The orbits are then mobilized and brought towards each other. Due to the fact that this often creates excessive skin between the orbits a midline excision of skin is frequently necessary. This approximates the eyebrows and eye corners and provides a more pleasing look.

Facial bipartition:- The standard procedure (box osteotomy) was modified by Jacques van der Meulen and resulted in the development of the facial bipartition(or median faciotomy).Facial bipartition first involves splitting the frontal bone from the supraorbital rim. Then the orbits and the midface are released from the skull-base using monoblock osteotomy. Then a triangular shaped piece of bone is removed from the midline of the midface. The base of this triangular segment lies above the orbita and the apex lies between the upper incisor teeth. After removing this segment it is possible to rotate the two halves of the midface towards each other, thus resulting in reduction of the distance between the orbits. It also results in leveling out the V-shaped maxilla and therefore widening of it. Due to the fact that hypertelorism is often associated with syndromes like Apert, hypertelorism is often seen in combination with midface dysplasia. If this is the case, facial bipartition can be combined with distraction osteogenesis. The aim of distraction osteogenesis of the midface is to normalize the relationship between orbital rim to eye and also normalize the position of zygomas, nose and maxilla in relation to the mandible.

Soft tissue reconstruction:- To create an acceptable aesthetic result in the correction of orbital hypertelorism, it is also important to take soft-tissue reconstruction in consideration. In this context, correction of the nasal deformities is one of the more difficult procedures. Bone and cartilage grafts may be necessary to create a nasal frame and local rotation with for example forehead flaps, or advancement flaps can be used to cover the nose